Marquis of Lorne Chapter 100 not out

The British celebration of traditions can be attributed greatly to the Victorians, as Victorian appreciation of nostalgia and the gothic tradition of literature and other facets of culture relied so much on history. Victorians also showed great enthusiasm for the celebration of British greatness (like the hugely popular 1851 Great Exhibition). Today Marquis of Lorne Chapter No 1354 recounted its origins and celebrated 100 years of Royal Arch Masonry in Leigh. 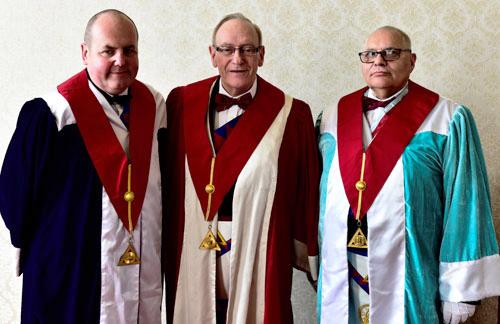 Pictured from left to right, are: David Ingham, James Carmichael-Prince and Roy Grime.

The year 1919 was very different from the times we enjoy in 2019. Britain and its allies had only recently celebrated Victory in the 1914-1918 war with Germany, 10s of 1,000s shell shocked servicemen were returning to their families, the Eiffel Tower was the tallest structure on earth and had been for over 20 years, television sets were not in regular use and films were still silent and also in black and white, the term “Modern Art” was established as brave new forms of abstract expression led by Pablo Picasso and Salvador Dali gave rise to the terms Cubism and Dadaism.

Against this background several Leigh Masons determined that the formation of a Royal Arch Chapter was required in Leigh. A meeting was called by Frank Arrowsmith a past master from the Marquis of Lone Lodge No 1354 and took place at the White Horse Hotel in Leigh on 13 February 1919 at which there were 11 distinguished attendees chaired by Cecil Ramsden. Over the next months the founders met in March, April and May, at which were established the subscription fees, the chapter officers, the by-laws, purchasing of chapter equipment and the proposed date of the consecration.

Opening the chapter, the current officers; first principle James Carmichael-Prince, second principle David Ingham and third principle Roy Grime quickly completed the early business of the chapter. When James announced that the next business was to celebrate the Marquis of Lorne Chapter centenary, the expected knocks on the door saw admitted the Provincial Deputy Grand Director of Ceremonies David Thomas. David’s entrance heralded the presence of Deputy Grand Superintendent Paul Renton who demanded admittance. Paul was preceded by a magnificently colourful procession of grand and acting Provincial grand officers. James then acceded to the requirements of this auspicious occasion and offered the sceptre to Paul who accepted with good grace and proceeded to congratulate the chapter on its 100th birthday.

Paul then declared the special conclave of Provincial Grand Chapter open; detailed the reasons that it had been formed, not only to celebrate 100 years of the Marquis of Lorne Chapter but also to express gratitude to God, for the life and work of the companions over the last century. Paul then called upon the acting Provincial Grand Scribe Ezra to read the Centenary Charter, Andrew then proceeded to read the original proclamation from Supreme Chapter which permitted the formation of the Marquis of Lorne Chapter and further to relay the permission of Grand Chapter, for bona fide subscribing members of the chapter, to wear for the ensuing year a centenary jewel. When reading of the centenary warrant was complete, Paul presented the warrant to James and pinned a centenary jewel on his breast, which in turn allowed the companions of the chapter to wear their jewels. 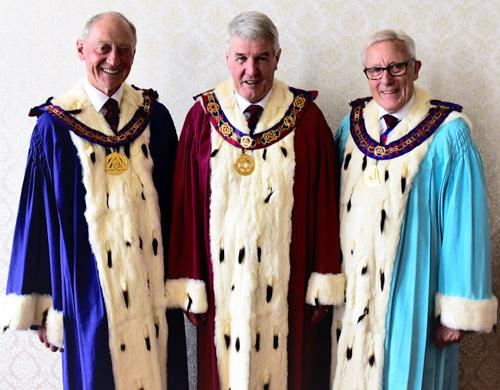 Pictured from left to right, are: Barry Jameson, Paul Renton and Ian Higham.

The particulars of the warrant complete, Paul announced that the next business was for Rev Canon Godfrey Hirst, to deliver an oration and to give a prayer of rededication to the many assembled companions. Godfrey then proceeded to ask the question, “What’s in a name?” and informed the companions that the chapter name and number was taken directly from the Marquis of Lorne Lodge that had been previously established in Leigh since 31 May  1871 and that this name was selected after several other names had been proposed and rejected by Grand Chapter, eventually settling on the current name due to the popularity, at that time, of the marriage of Queen Victoria’s fourth daughter Princess Louise to the eldest son of The Duke of Argyll, The Marquis of Lorne. In further elaboration on his life, companions were informed that whilst Governor General of Canada, he was also patron of the arts and letters as well as the author of many books of prose and poetry and was particularly famous for his metrical paraphrase of Psalm 121. Godfrey was then kind enough to treat the companions to a wonderfully reverential reading and an especially exuberant explanation of the Psalm. Additionally, in a comprehensive explanation of the Royal Arch Jewel motto, illustrated on the cover of most summonses, companions gained their daily advancement in Masonic knowledge as the literal meaning of the words; ‘Deo Regi Fratribus Honour Fidelitas Benevolentia’ were expounded, as previously stated, comprehensively. The chapter was then rededicated with solemn prayer.

Paul next invited James Carmichael-Prince to present the results of his investigations into the secretaries minute book for the last 100 years reporting numerous observations of interest covering the Second World War starting in 1939, relaying that it proved to be a traumatic year, not only for the world in general but also for Freemasonry, as in October of that year, a month after the start of the Second World War, United Grand Lodge decreed that, having regard to the Emergency Orders of HM Government, until further notice, all Masonic meetings were to be suspended. Fortunately, this was rescinded after one month and the chapter’s installation took place as usual. During the War, the Grand Master had requested that refreshments be kept as simple as possible to conform to the need for national economy. James then informed everyone that in between the years 1919-1999 there was only one year that no exaltation ceremony took place and that since the consecration ceremony in 1919 the chapter had exalted 285 companions and had 29 joining companions.

At the conclusion, Paul closed the special convocation of Provincial Grand Chapter and requested that all the companions joined him in singing the first verse of the National Anthem. Being the conclusion of the proceedings, he returned the sceptre to the hands of James Carmichael-Prince. Whence James promptly presented a cheque in the sum of £1,354, the chapter’s number, to the 2021 MCF, where upon its receipt the chapter was presented with a Patrons Certificate in recognition of the achievement. The companions then retired to the grand setting of the Hilton Suite for the festive board, a fitting venue for the historic celebration.

In the toast to the chapter, Paul Renton thanked the Provincial Team for the support that they had given him during the evening and he commented that the ceremony had been something very special and gave particular thanks to Rev Canon Godfrey Hirst for his oration, David Case for the sterling work he has done over the year as Provincial Grand Scribe Nehemiah, continuing to particularly comment of the work of Mike O’Neill in organizing the details of the Provincial Team visit and James Carmichael-Price for the work and wonderful presentation in the pamphlet ‘Centenary 1919-2019 A Brief History’. He gave particular reference also to the “breath-taking” donation to the MCF 2021 Festival. In conclusion Paul reiterated the importance of retention and the need to look after the companions that are brought in to Royal Arch Masonry. A thoroughly enjoyable evening and enjoyed by every single companion in attendance.

Article and photographs by Wayne Barnes.

Home
About Freemasonry
Our Group
Royal Arch
Privacy and Accessibility